HOW ARE YOU BEING TREATED BY SODEXO?

All over the U.S. and around the world, current and former employees of Sodexo are coming forward and fighting against low wages, poor working conditions and discriminatory treatment by the company. Abbey Spanier, LLP applauds the brave actions of these individuals as they fight for a fair wage and decent working conditions.

The Service Employees International Union (“SEIU”) has reported that seven states have filed unfair labor practice charges against Sodexo.  The SEIU is activity trying to educate the public about the working conditions at Sodexo.  http://cleanupsodexo.org/a/anti-worker-record/

Several class actions have been filed on behalf of particular current and former Sodexo workers in California and at St. Lukes and Good Shepherd hospitals in Pennsylvania.  According to the complaint filed on behalf of workers at St. Lukes and Good Shepherd, the company forced workers to work 15 to 45 minutes off the clock and work through breaks without getting paid for this time.

Most recently, students at Ursinus College rallied together to help support Sodexo workers suffering from poor working conditions and low wages, and circulated the following: 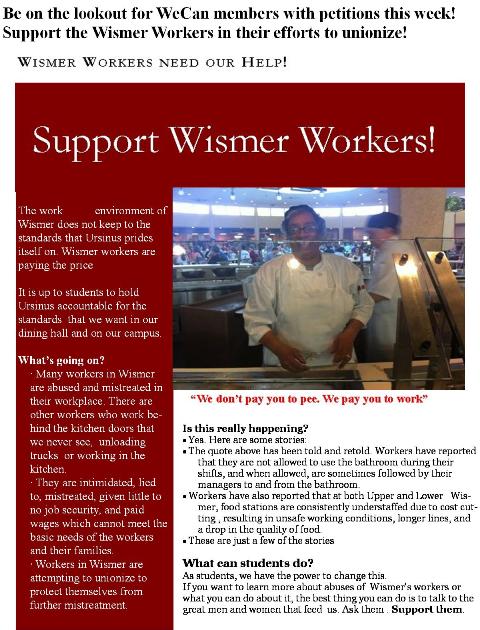 The actions of the individuals who brought these cases may help bring change to the way Sodexo treats its workers here in the U.S and the entire world, but more has to be done.   If you believe that you are being cheated out of wages for hours worked or are being forced to work off the clock or through your meal breaks, please tell us your story.  Abbey Spanier has extensive experience in representing current and former employees of large corporations who have been denied compensation in violation of the federal and state labor law.

Abbey Spanier is a lead counsel in Braun and Hummel v. Wal-Mart Stores, Inc. This class action was brought on behalf of 186,000 current and former hourly employees of Wal-Mart in Pennsylvania.  Common Pleas Judge Mark I. Bernstein affirmed a $185 million award against Wal-Mart in this class action.  Judge Bernstein’s opinion said that the appeals court should affirm a jury verdict finding over 186,000 current and former Pennsylvania Wal-Mart employees were not properly compensated for off-the-clock work and missed rest breaks between March 19, 1998, and May 1, 2006.  The jury expressly found that Wal-Mart did not act in good faith because it did not pay class members for missed rest and rest breaks and off the clock work.

[1] According to its website, TransAfrica Forum is the “oldest and largest African American human rights and social justice advocacy organization promoting diversity and equity in the foreign policy arena and justice for the African World.”