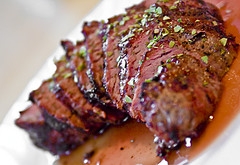 Some rights reserved by TheBusyBrain.

A group of Park Avenue restaurant waiters recently succeeded in persuading the Second Circuit to reject Smith & Wollensky Restaurant Group, Inc.’s appeal of a District Court ruling in the waiters’ favor, allowing them to return to the District Court to prosecute their unfair employment practices claims against the restaurant. Read the Circuit Court’s ruling here.

The waiters allege that Smith & Wollensky, which owns Park Avenue restaurant, failed to pay minimum wage and overtime and illegally deducted gratuities, among other things, which are violations of the New York Minimum Wage Act, several sections of the New York Labor Law (NYLL) and the federal Fair Labor Standards Act (FLSA). You can read more about New York State wage and hour laws here and the FLSA here.

A minority of federal courts have found opt-out and opt-in actions to be fundamentally incompatible with each other and have refused to permit state court opt-out class actions to proceed alongside federal FLSA opt-in collective actions in the same proceedings.

However, the District Court sided with the majority of courts in this instance finding no reason the waiters’ state and FLSA claims could not proceed side by side.

The District Court’s finding was supported because the waiters’ federal and state law claims derived from “a common nucleus of operative fact” and none of the factors that might have otherwise granted the District Court discretion to decline supplemental jurisdiction existed.

If you believe your employer has failed to pay you overtime or minimum wage, or has wrongfully withheld gratuities from you, please tell us your story.