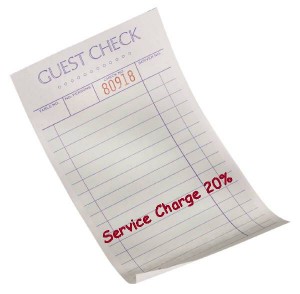 Many banquet halls and catering establishments require customers to pay an additional “service charge,” often around 20 % of the total cost.  Can the establishments simply pocket the money or does this “service charge” belong to the servers?  In New York the current law is clear.  Section 196-d of the New York Labor Law forbids employers and their agents from “retain[ing] any part of a gratuity or of any charge purported to be a gratuity for an employee.”  In an Opinion Letter dated March 26, 1999, the Department of Labor (DOL) advised that

[i]f the employer’s agents lead the patron who purchases a banquet or other special function to believe that the contract price includes a fixed percentage as a gratuity, then that percentage of the contract price must be paid in its entirety to the waiters, busboys and “similar employees” who work at that function . . ..

In February of 2008, New York’s highest court, the Court of  Appeals, cited this Opinion Letter when it held that “[a]n employer cannot be allowed to retain” “mandatory charges . . . that employers represented or allowed their customers to believe . . . were in fact gratuities for their employees.  Samiento v. World Yacht Inc., 883 N.E.2d 990, 993 (N.Y. 2008).

Now, more than four years after the Samiento decision, and more than thirteen years after the DOL Opinion Letter, the New York Senate has passed a bill, S.6299-B, that would allow employers who illegally retained service charges in the past to keep the money.  The Assembly is considering a similar measure, A.09439-A.  The supposed rationale for this bill is an internal DOL memorandum written in 1995 that did not consider the “service charges” to be gratuities under Labor Law § 196-d.  As DOL Opinion Letter, RO-08-0107; RO-080111; RO-080129 (Dec. 1, 2008) noted, the “Opinion issued by the Department dated March 26, 1999 effectively superseded the 1995 memo.”

Even if employers felt that the law was unclear before the Samiento decision, after the decision on February 14, 2008, employers had no excuse for continuing to retain “service charges” instead of distributing them to their wait staff.  If this bill becomes law employees will be deprived of any means of obtaining the service charges that rightfully belong to them.  In addition, employers who scrupulously followed the law, causing them to appear to charge more than those employers who retained the service charge, will be put at a competitive disadvantage.  Instead of rewarding bad behavior, the Assembly and Gov. Cuomo should reject this misguided bill.